Campoli Presti is pleased to announce Legs and Stripes, Katherine Bradford’s first solo exhibition with the gallery and in the UK. The exhibition features a group of new paintings which continue Bradford’s figurative research within the tradition of color field painting. Although featuring human characters, the works enhance their abstract qualities through horizontal divisions, often playfully allegorized with legs.

Bradford gradually moved from abstraction to figuration and developed a body of work around the elements of fire, air and water, the latter being a unique source of experimentation between transparency and colour. Her figures have progressively gained intensity and depth through a translucent use of thin layers of colours, leaving the earlier stages more visible. Her preference for acrylic paint facilitates the visibility of each passage, from dry paint to thin or rubbed-out layers, achieving luminous hues of colour.

Although Bradford explores the way figures organize foreground and background, she considers herself as a color field painter. Her management of space, deeply influenced by glowing zones of pigment, recalls Rothko’s boundless compositions. The perception of the edges of the figure dissolves with incandescent zones of pigment, subverting scale and perspective. Bradford has always been interested in the architecture of the frame, often deconstructing it or recomposing it through diptychs. In this series of works, rhythmic horizontal divisions structure the space of the canvas, either by clear lines, by the shape of the human figure itself, or by its sequenced repetition.

Interacting with the segmented, abstract background, Bradford creates characters who explore the different ways in which individuals choose to present themselves. Sociologist Erving Goffman, who argued that our interactions are performances, stated that we have a basic social coin, with awe on one side and shame on the other: “The theatre of our conduct is composed of two regions: front regions where a particular performance is or may be in progress, and back regions where action occurs that is related to the performance but inconsistent with the appearance fostered by the performance”.

Bradford concentrates on our visible and coherent side as much as the cryptic and absurd aspect of our social behaviour. In previous series, divers, night swimmers and superheroes float in an ethereal aura. Disaster, inflated masculinity, and vulnerability occupy the atmosphere of her canvases. For this new body of paintings, Bradford brings back subjects from earlier works or juxtaposes characters in playful, absurd scenes such as Group Portrait, 2019. Within her exploration of human masks, some works feature anonymous blank subjects interacting with those who have detailed facial features, accentuating the perception of a world between the real and the oneiric.

Katherine Bradford (1942) lives in New York City and has a painting studio in Williamsburg, Brooklyn. She was Senior Critic on the faculty of the Yale School of Art (2016–17) and was on the MFA faculty at the Pennsylvania Academy of the Fine Arts in Philadelphia (1997-2013). 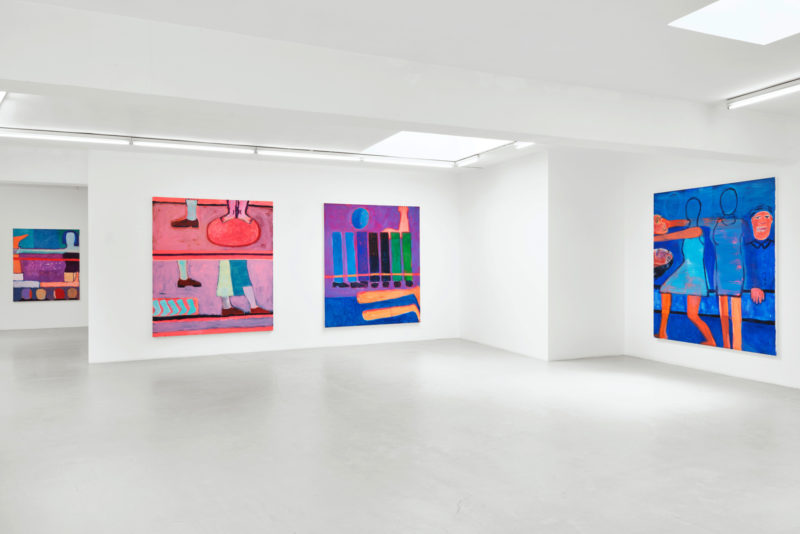 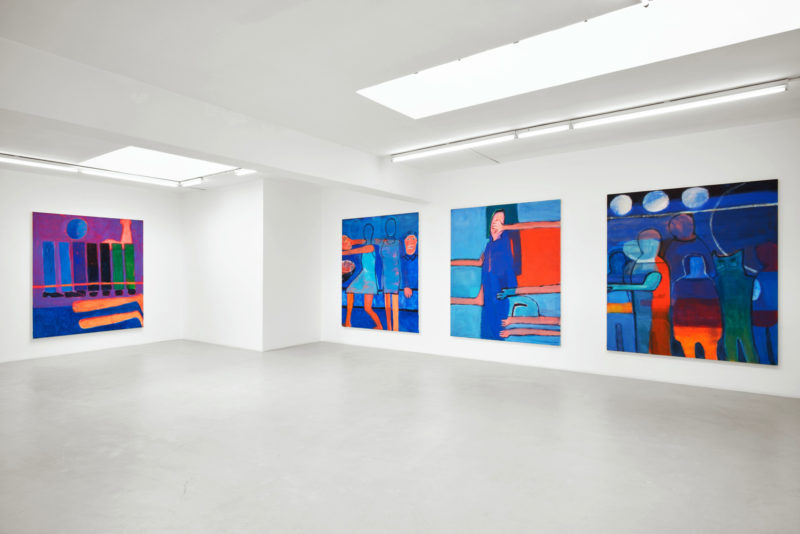 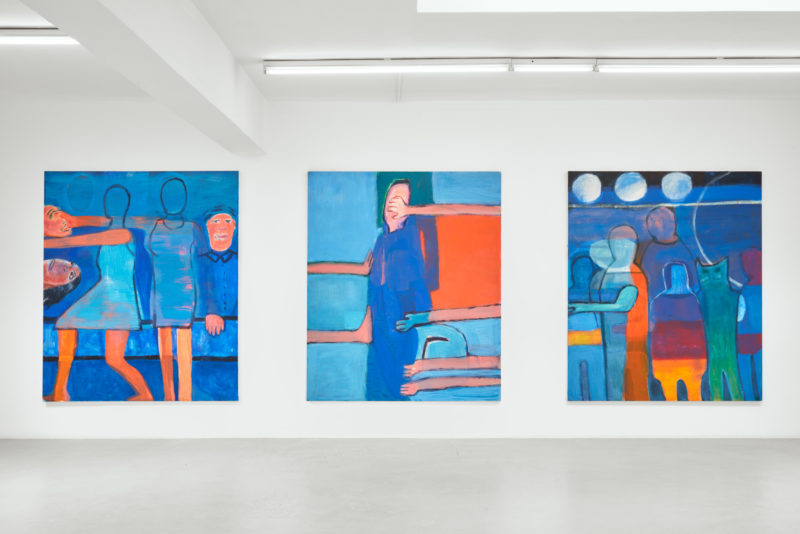 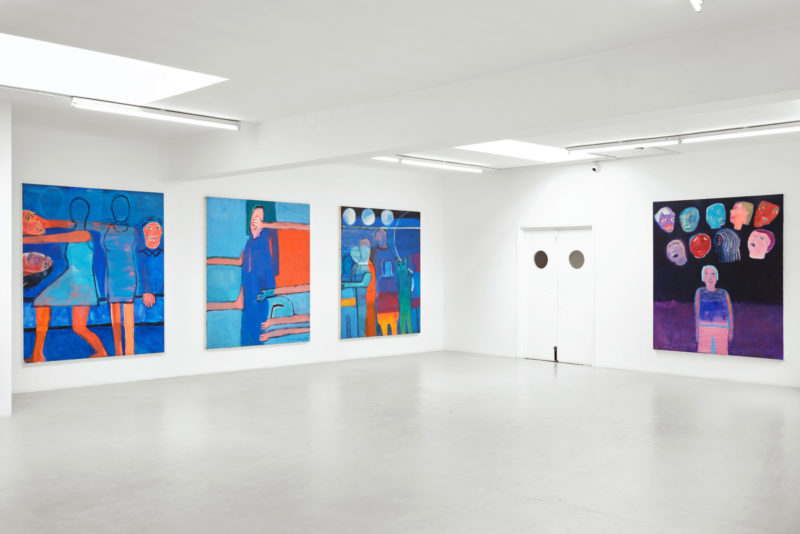 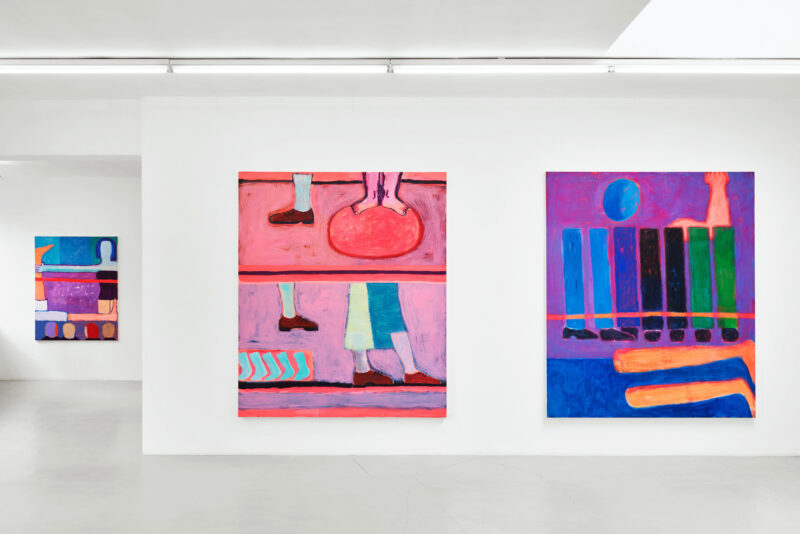 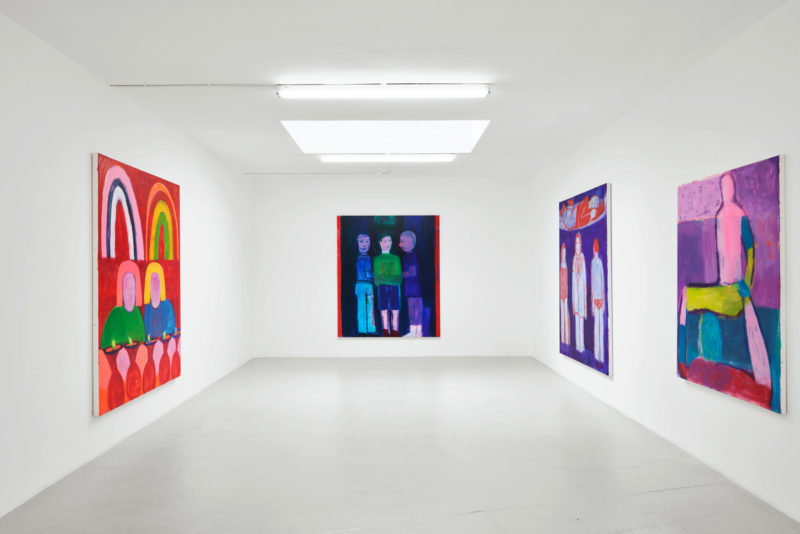